Juiced is a racing video game for Microsoft Windows, PlayStation 2, Xbox, and mobile phone. The game was delayed for release in 2004 because its original publisher, Acclaim, went bankrupt. Juice Games and Fund 4 Games retained ownership of the property and sold the game to THQ, who funded the project for a further six months of improvements. In early 2006, British software publisher Focus Multimedia re-released the PC version of Juiced at a new budget price as part of its “Essential” games series. The game offers different modes including career and arcade that present the player with challenges of increasing difficulty. The player can customize the car to suit their style and unlock new ones in arcade mode. The game features nitrous boosts, similar to that of other racing games. Juiced went to number one in the United Kingdom MCV sales charts and its first version sold 2.5 million units.

Gameplay in Juiced is based around a calendar system (this system was reused in Juiced Eliminator). Events are scheduled to occur on certain days and then you have the choice of partaking or not showing up at the event. There are several different racing teams who appear in Angel City, and each team has their own niche that will make earning their respect much easier.
As you progress through the game, you will earn money that you can use to purchase new cars or upgrade currently owned ones. Generally, the ‘best’ cars are AWD, as they are the easiest to control, and they can be upgraded to reach extremely high speeds. The in-game system is arguably inspired by Need for Speed: Underground as it features some of the same elements, such as closed off city streets. There are several different forms of racing events in the game, and these are:
Circuit: Circuit races are just that. There is a fixed circuit with several laps, and you are challenged to win the race. The first person to complete all the laps and pass the finish line is the winner.
Point to Point: These events are similar to circuits, though they are not as fixed. You are given a route through the city and are told to reach the end first. The difference between Point to Point and Circuit races are that PtP events have no laps.
Drag: Drag races, or Sprint races as they are called in-game, are events where several cars line up along a straight. They are then challenged to cross the line first, which is generally one mile away. In Juiced these races are much easier by turning up with an AWD car, such as the Mitsubishi Lancer.
Showoff: Showoff events are events where you have a fixed amount of time, and are challenged to earn a certain number of points through performing tricks and stunts. An example of the stunts you are encouraged to do are 180-degree spins, and J-Turns. 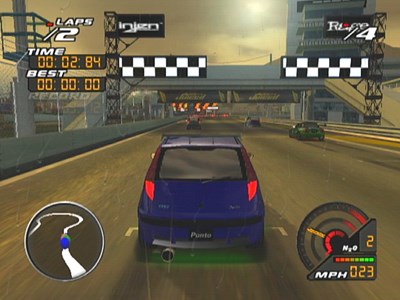 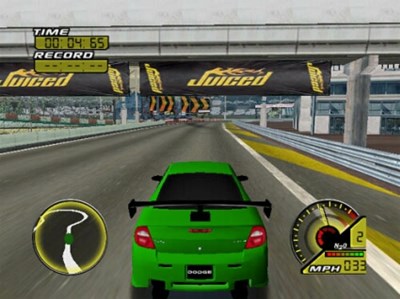 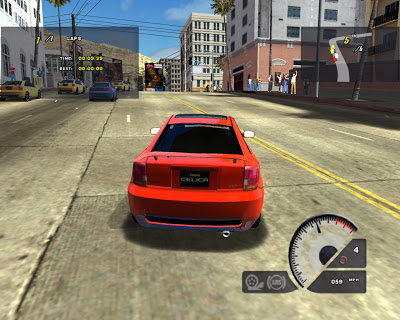